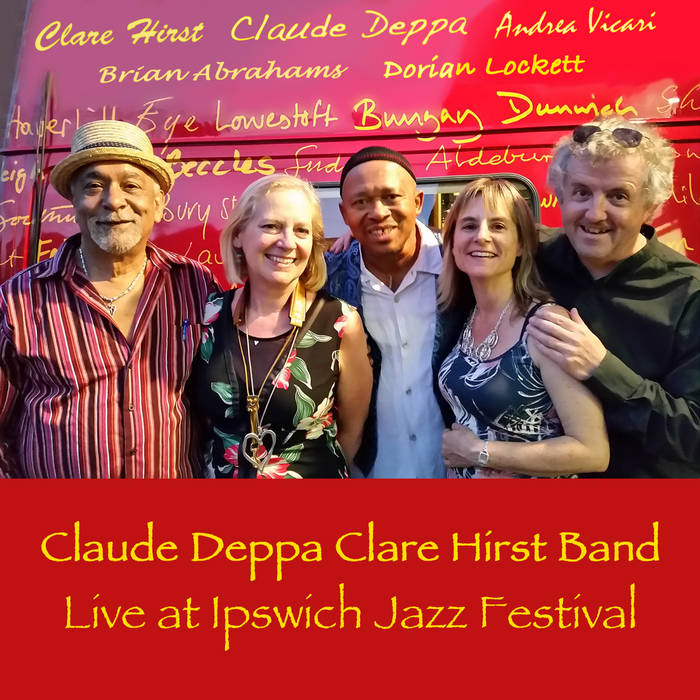 The Deppa Hirst Band has performed at Marlborough; Greenwich and Swanage Jazz Festivals. The music is a mixture of Claude and Clare's eclectic compositions with influences from Township Jive to Brazilian Samba and Jamaican Reggae. Completing the lineup is pianist; composer and broadcaster Andrea Vicari and multibassist Dorian Lockett, here on electric bass and Brian Abrahams on drums. This album was recorded at Ipswich Jazz festival.

CLAUDE DEPPA – TRUMPET
At the forefront of the African jazz music scene is South African born trumpeter and composer Claude Deppa. His music, dizzyingly eclectic, incorporates African, world, Afro-Cuban, jazz, improvised, soul, funk and European chamber music, all of which he plays with a brilliant and pungent sound. Deppa has performed with a rich array of contemporary international jazz talent, including Dewey Redman, Art Blakey, Carla Bley, Miriam Makeba, Archie Shepp, Courtney Pine,Brotherhood Of Breath, Andy Sheppard, District Six, Harry Beckett, The Grand Union Orchestra, Billy Jenkins, Louis Moholo, Evan Parker, Dudu Pukwana, Jamaaladeen Tacuma, and Steve Williamson. Deppa has formed and leads several bands, including the African Jazz Explosion, Horns Unlimited and Five Funky Fellas. Claude leads the brass section of Kinetica Bloco, a project that celebrates the music of the African Diaspora with themed summer schools and performances. Claude's story of his experiences growing up in South Africa and then coming to Britain in 1974 is printed in the book 'Celebrating Sanctuary'. Claude's CD, “Toi-Toi” is a glorious blend of funky and more mellow tracks, with printed notes by Claude himself.

CLARE HIRST – SAXOPHONES
Clare was born in Cumbria and studied piano and clarinet until managing to get hold of a saxophone. She moved to York and then to Leeds before eventually making it to London where a successful career in pop music ensued. Having played live and on recordings with artists such as David Bowie, The Communards,Mica Paris, The Bellestars and Maxi Priest, she spent some time working with Mervyn Africa before embarking on a solo career based around her Quartet. Since then she has played with many of the country’s finest jazz musicians including Tony Kofi, Art Themen, David Newton, Alan Barnes, ClareTeal, Mark Nightingale, Byron Wallen, Don Weller, Claude Deppa, Jim Mullen and Dick Pearce. She has performed concerts in USA, Japan, Hong Kong and extensively in Europe including many TV performances. Her performance with David Bowie on Live-Aid can be seen on the Live-Aid DVD. Her experience with such a diverse mixture of musical styles ranging from salsa to reggae to funk and African music, along with a heavy influence from jazz players such as Sonny Rollins and Chick Corea, has created a unique style. The Clare Hirst Quartet has performed at many festivals, clubs and arts centres throughout the country. She currently has three CD’s out; the first entitled “Tough and Tender” called “Summer Song” and the third CD “Touchy”. All available from www.clarehirst.co.uk

ANDREA VICARI – PIANO
Andrea Vicari made her mark on the jazz scene both as a pianist and composer and has five albums under her own name as well as two records with ‘Jazz Extempore’; a multi-national project formed through a cultural exchange initiated in Croatia. Andrea has written music for this band and arranged UK tours including a recent residency at Lyth Arts Centre in Scotland. She has just released an album of original songs with vocalist Trudy Kerr called ‘The House”. Most recently Andrea has performed the Marlborough Jazz Festival with South African Trumpet star Claude Deppa; Teignmouth Jazz and Blues Festival with Steve Waterman; Stratford Jazz, Shrewsbury Jazz ; Scarborough Jazz Festival; and The Bulls Head Barnes with Ex Ronnie Scott sax player Mornington Lockett. She has performed with world greats Eddie Harris and Art Farmer. As well as being musical director of the Dordogne Jazz Summer School Andrea is a jazz piano professor and senior lecturer at Trinity Laban conservatoire - one of the leading colleges in Britain for Jazz studies.

Andrea presents a weekly radio programme on www.jazzlondonradio.com; "Andrea Vicari's Jazz Doodles”; which debuts every Tuesday at 3pm and is repeated at various times throughout the week. In the past year she has broadcast interviews with leading jazz artists including John Taylor; Hiromi; US stars Bill Stewart; Marc Copland; John Abercrombie and Larry Goldings; plus Bill Laurance (Snarky Puppy); Omar Puente; Joe Stilgoe; Bobo Stenson and many more. www.andreavicari.com

Special thanks to Neil Bateman at Ipswich Jazz Festival
www.ipswichjazzfestival.org.uk

The Deppa Hirst Band has performed at Marlborough, Swanage, Greenwich and Ipswich Festivals. The music is a mixture of Claude and Clare's eclectic compositions with influences from Township Jive to Brazilian Samba and Jamaican Reggae.

Bandcamp Daily  your guide to the world of Bandcamp